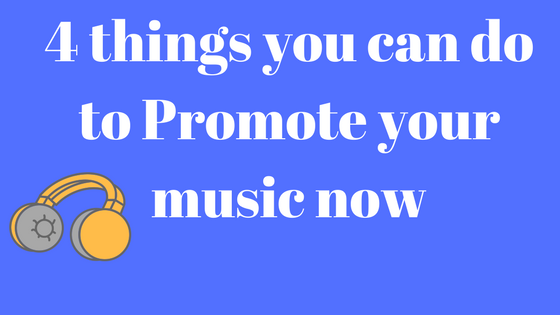 You have finished the recording and mixing process for your new song now what? Here are four things you can do now to promote your music.

The general understanding is, each person, may know at least five persons.These persons may be friends, acquaintances, family members,  persons you meet, etc. You’d have had their contact email address, or, are friends on  Facebook, for instance.
So this first strategy is simple. You send the song to these persons that you know and talk to on a regular basis. Include a message stating the title eg:” mama don’t cry”, and suggest the need for feedback.
Be it email, WhatsApp, Facebook, make it a personal message to the persons, asking them to listen to the song, and to give their take on it.

2. Share It on social media pages, or Groups online

Outside of emailing friends, you can post the songs for example on facebook, twitter, google+. This is just one aspect. Another aspect is posting the song in groups. You may be a part of different groups based on your interest.

Eg: you may be apart of a football club group, so it’s easy to share the song with them, as you would already have been familiar with them. You could engage one on one with some members, getting feedback on the song. You might say, ” hey guys I have a new song called Mama Don’t Cry, and  I’d  really love your feedback.

It’s basic stuff like that. It should not be done as a blast Instead, explain in your message that you have a new song, also stating your reason, intent, and need for feedback.

3. Send the music to DJs for radio play DJs who will play the music you do

This is a big part of the promotion process. You should find DJs that play your music. It makes no sense to send a reggae song, to a contemporary gospel station. Find the DJs that play your music. They are easy to find, they are on Facebook, they’re on Twitter. Ask them for their email address, let them know you have a new song you want to submit it to them, then send the song to them.

Most of the times you may get their email address for you to submit the song to them, and if they like the song, it will be added to their playlist, for airplay. Some DJs will compile mixtapes and may add your song to the mix.

For those DJs who are not on a radio station, they are Online. They might put out mixes weekly to their audience so you can submit your work to them as well.

Live performances can be seen as a way to promoting your music.  Each time you go to a concert to sing, for example, the song you would promote at the time, should be apart of your performance set. This is something that is noticed to be done by a lot of artists. eg: in the Jamaican gospel scene, an artist like DJ Nicholas, when he was promoting his single ” Holy Ghost Gym,” for every performance around that time, this song was done.
This was a part of his promotion strategy for the song. After a while the song became popular.
This is one way to consider when promoting a new song.

Using these four simple methods, you have four ways to promote your music:

What is the Correct Way to Send Promos To DJs

How to use an album as a marketing tool